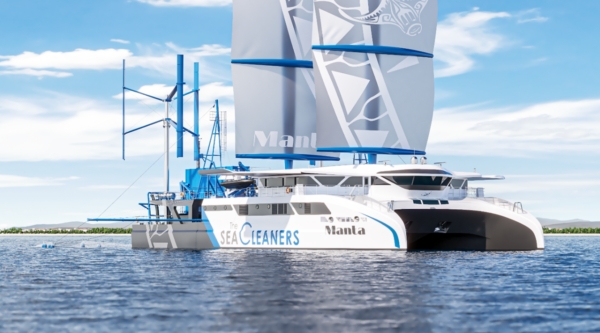 In collaboration with out French partner, Fondation de France, the TGE team interviewed Valérie Amant, Communication Director of The SeaCleaners, a French non-profit organization and TGE beneficiary that acts for the long term conservation of the ocean and for the reduction of marine plastic pollution.

TGE: Could you introduce the SeaCleaners in a few words and the main activities carried out?

Ms Amant: The SeaCleaners is an NGO based in France and founded in 2016 by Yvan Bourgnon. Our organization acts for the long term conservation of the ocean and for the reduction of marine plastic pollution. We develop actions both at sea and on land, both corrective and preventive.

We carry out mainly four missions. It consists in collecting floating plastic waste in areas of high concentrations before the pollution starts to break down into microplastics; contributing to scientific knowledge trough research and open data sharing; alleviating plastic pollution at its source through education and public awareness initiatives; and developing innovative ecofriendly technological solutions, both for plastic waste management and for clean marine technologies for ships, in order to support the transition to circular economy.

TGE: What motivates you to collect the marine plastic waste?

Ms Amant: Every year, between 12 and 14 million tons of plastic pollution are discarded at sea – the equivalent of a 17 tons garbage truck every minute -. This pollution has a negative impact on the ocean, on the capacity of the ocean to produce our oxygen, to capture carbon and to reduce climate change.
We have mainly five motivations for collecting plastic waste at sea: protection of public health, the mobilization effect of the collection of the waste, the economic benefits related to the restauration of the natural sites, protection of the environment and combatting climate change.

This marine pollution does not only concern the people living by the sea, it does concern all of us. If the ocean will be “plasticized”, then it will not be able to produce oxygen. 50% of our oxygen comes from the ocean. This is why we need to preserve this capacity of the ocean to create oxygen. This is why it is also important to prevent, to raise awareness and to turn down the tape at the source of plastic pollution.

TGE: What is your main project?

Ms Amant :The building of the Manta is our iconic project. It will be a giant sailboat that will be designed to combat marine plastic pollution and it is going to be launched at sea in 2025. It will be able to collect, to process and to recover large quantities of marine plastic waste before it gets fragmented and penetrates the marine ecosystem. It will operate in high marine litter concentrations, especially near the estuaries of major rivers and the coastal waters of countries that are the most impacted by the plastic pollution. It will also operate as a scientific laboratory for the observation, the analysis and the understanding of the ocean plastic pollution. It will be able to host 10 to 12 scientists on board for long term missions.

TGE: What challenges do you face?

Ms Amant : After more than 45 000 hours of research and conception work, the project has been approved and certified by the Bureau Veritas – one of the main certification organism in the world -. This means that  Manta is a solid concept and it is ready to be built. However, we are at a crossroad of the project because what it still lacking now are the funds. A certain amount of funds have already been raised thanks to our corporate sponsors and private donations, but we have to collect more funds in order to rapidly start the construction of the Manta.

TGE : Why did you decided to join the TGE Network? Do you think having an online giving TGE page will help you overcome some of your current challenges?

Ms Amant: It is a very positive system for us, it facilitates donations from foreign countries to our project. I think that without it,  we would not be able to involve in the same way foreign companies in our project. Our project is almost 95% funded by companies through corporate sponsorship.

About why we decided to join, it was an opportunity in 2018, when a very important Belgian company contacted us, just before Christmas, to make a donation. At that moment, we called TGE and they were very reactive and everything was organized in less than a week. This company, which is now our long term partner, managed to get involved in the project through this TGE process. We are very grateful and we think that it was the right way to do.

Also, being part of the TGE, gives us more credibility. This is why this is a very important part of our fundraising strategy abroad. I would definitely recommend to every non-profit organisation that has an international scope and wants to extend its activities at an international level  to join the TGE. I would say that without TGE, it will be much more difficult to raise funds.

To learn more about The SeaCleaners, visit their website.