In 2018 Transnational Giving Europe was approached by the Arvo Pärt Centre, an Estonia-based organisation interested in benefitting from our European network. This initiating paved the way to finding our Estonian partner, the Open Estonia Foundation.

We had the opportunity to talk to Michael Pärt, son of Arvo and Chairman of the Board. 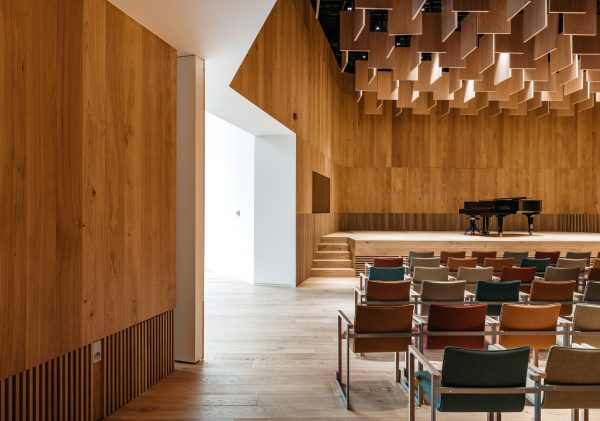 Estonian-born Arvo Pärt (1935) is one of those composers whose creative output has significantly changed the way we understand the nature of music. Since 1976, his unique tintinnabuli compositions have established a new kind of musical paradigm – a radically different approach to many aspects of music, as well as to interpretation and listening.

The Arvo Pärt Centre is a creative meeting place for anyone interested in Arvo Pärt’s work and world of ideas. The centre is situated in Laulasmaa, near Estonia’s capital city Tallinn, on a peninsula with magnificent natural surroundings – within a pine forest near the sea.

The Arvo Pärt Centre will open its doors to the public in October 2018, the year that Estonia celebrates its 100th anniversary. A very important next step in the development of the Centre.

We had the opportunity to talk to Michael Pärt, son of Arvo and Chairman of the Board.

He starts of outlining the dynamics that led to the founding of the Arvo Pärt Centre.

My parents emigrated from Soviet-occupied Estonia to Austria, and then on to Germany. Under the Soviet Regime artists were considered employees of the state and their work consequently belonged to the state. Once emigrated, my parents became owners of their own affairs and started building up an extensive collection of audio and video recordings, manuscripted scores and literature.

After the fall of the Iron Curtain, they returned to Estonia and considered a number of methods to make this creative archive alive and available. Preserving the legacy only a part of it, but making it possible to engage with it is at the core of our direction. That’s how the idea of building up an archive, and subsequently a Centre came about, now almost 10 years ago.

Since 2010 Arvo Pärt has been the most performed living composer in the world, and listeners of his music can be found all over the world.

Michael mentioned that in the beginning it is more challenging to fundraise internationally, as you are still developing and refining.

Ideas can work locally but the further you go geographically the more you need something tangible. Now we are getting to the phase where we get more specific and can show results of fundraising and activities to be conducted at the new Centre.

Having a physical building to engage with the public makes it easier to connect with donors located across the globe. TGE enables the Centre to tax-effectively raise funds from European donors, living in one of the 20 countries where TGE has a partner.

Theoretically there was no need for TGE if all European laws would work perfectly in tandem. In practice however there is no way to guarantee to a donor that they continuously can get a tax receipt and the last thing we need is confusion around any tax questions. A donor expects guarantee and guarantee every time.

Friends’ connections in Germany and Switzerland had the recommendation that TGE might do exactly what we want it to do. Up until then we feared we would have to set up local foundations in order to receive tax-benefits to donations. This would have meant looking at it from a national level whilst the idea is to look at it at the European level, sharing tax benefits and tax liabilities. As the theory goes, when you have a tax benefit in Germany this has to benefit the German tax payer – TGE makes it possible to bridge this gap and to have this context at a European level rather than solely at the national level.

It allows us to focus on our core activities as opposed to setting up foundations left, right and center. We would like to keep our operations as lean as possible with the fewest overheads as possible and it is very good to have a unifying method and system that takes care of all the taxation matters within Europe.

The Arvo Pärt Centre has been communicating to their donors living abroad about the possibility to donate through TGE. They are concretely awaiting donations coming from Germany and Switzerland.

The Centre is opening to the public in October 2018 in its new, unique building designed by Spanish architects Fuensanta Nieto and Enrique Sobejano (Nieto Sobejano Arquitectos). The new building will provide an opportunity to carry out a number of activities related to the work of Arvo Pärt. On the one hand, it is an integral personal archive; on the other, it is a research and learning environment open to a wider range of topics with ’creating’ and ’creativity’ at the heart of it.

The future Centre will offer on-site research facilities, master classes and lecture series on topics related to Arvo Pärt’s music as well as composition and creativity in a more general sense. The Centre is also planning to start organising philosophical, theological and listening seminars, as well as concerts, conferences and art exhibitions. With its acoustic qualities the Chamber Hall will also be very suitable venue for recording as well as performing music. The Arvo Pärt Centre will be open to everyone who wishes to listen, learn and understand.