Fondazione Donor Italia collaborates with Intesa Sanpaolo and INSEAD Business School to set up a scholarship in honour of Michele Pedercini. 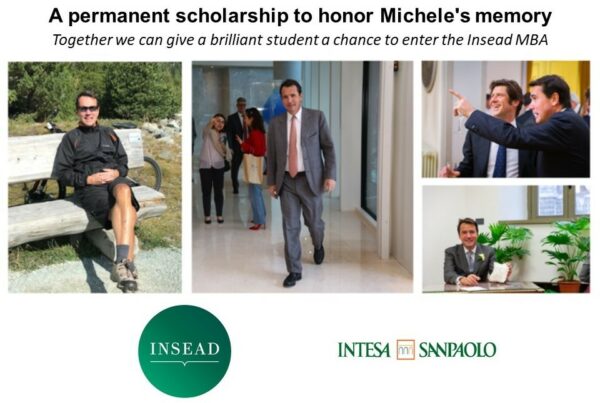 Intesa Sanpaolo, INSEAD and Fondazione Donor Italia have launched a fundraising campaign to set up a permanent scholarship, which will give a talented Italian student the opportunity to attend a Master in Business Administration at Insead Business School.

The initiative was created in memory of Michele Pedercini, who graduated from INSEAD in 1992 and worked for Intesa Sanpaolo, and who passed away prematurely last August.

The goal is to raise €400.000 and, thanks to the contribution of Michele’s fellow alumni and closest friends, a total of €214,854 has already been raised through Fondazione Donor Italia and the Transnational Giving Europe network before the launch of the fundraiser. The IMI-CIB Division of Intesa Sanpaolo decided to support this initiative by doubling all donations up to a maximum amount of €3,000 per individual support.

The scholarship will be awarded every year to an Italian student who has been admitted to the MBA programme and will amount to 16,000€ approximately. The “Michele Pedercini MBA’92J Scholarship for Italian Talents” will be awarded for the first time in September 2021.

For the fundraising campaign, Intesa Sanpaolo and INSEAD have chosen to partner with Fondazione Donor Italia, which has been carrying out philanthropic intermediation activities since 2017. Donor Italia is the partner for Italy of Transnational Giving Europe, the network that unites the largest European philanthropic foundations to facilitate donations at an international level.

When the fundraising closes at the end of February 2021, Fondazione Donor will transfer the collected donations to INSEAD and issue tax certificates to individual donors.

INSEAD is one of the world’s leading and largest business schools with locations in Fontainebleau, Singapore, Abu Dhabi and San Francisco. For more than 60 years, it has developed responsible leaders who believe in business as a force for good. Today, more than ever, scholarships are an important contribution to nurture young talents: due to the Covid pandemic, INSEAD has registered a 48% increase in scholarship requests compared to last year.

INSEAD, a TGE beneficiary, has established legal partnerships with foundations in 11 countries around the world, in order to allow the collection of funds for charitable purposes in-country and offer tax relief benefits to donors as per the regulations in place in each country. In Italy, such a partnership has been established with Fondazione Donor Italia Onlus thanks to its participation to the Transnational Giving Europe network.

Before this campaign, INSEAD and Fondazione Donor Italia Onlus have already collaborated annually through the Italian Alumni Association for their annual campaign, which is also ongoing now.

Universities greatly benefit from the use of the TGE network, which gives foreign alumni the chance to support their “alma mater” through a reliable and secure process and to receive the fiscal advantages available to them in their home country while doing it. Fondazione Donor Italia has perceived a considerable increase in requests for approval to TGE from colleges and universities across Europe in the past weeks and they expect to see more. In the future, the TGE network will play an increasing role in promoting education by facilitating philanthropy across borders.

Find out more about the initiative and make a donation!